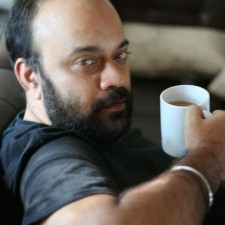 ‘Tell a story in pictures’. ‘Write visually’. ‘Show, don’t tell’. These are some of the cardinal tenets of screenwriting that are repeatedly impressed upon budding

and rightly so. But rarely does anybody stress on writing aurally, caring for the soundtrack as much for the visuals. There is a pressing need to encourage a way of thinking where the sound and visuals are treated as complementary to each other right at the beginning – THE SCRIPT.

Sure, the script is a skeleton upon which several departments of movie making add muscle, skin and a host of specialized elements to create the rich, wonderful living entity called the MOVIE. But a sound editor/designer and music composer need to come in right at the pre-production stage. They need to read the script and enter into the world of the story. An aurally rich script can fire their imagination and inspire them to draw from the script and contribute to it in a creatively exciting manner. The script can be their framework to prepare themselves for the cutting room.

So how does one write an aurally rich script? Just like a good screenwriter, puts in visual indications, the writer can encode many aural references by creating a sense of the environment in the description of the scenes. Akira Kurosawa once said:’ Real sound does not add to the visual. It multiplies it!’ Another master filmmaker Robert Bresson’s take was: ‘Sound should do something different from the visual’.

In Bresson’s classic film PICKPOCKET, there is an iconic scene of the protagonist, a pickpocket, trying to steal money from a lady’s handbag. The sophisticated audio-visual design creates an unparalleled sense of acute ‘real’ tension in the audience, which finds release with the sudden introduction of the sound of the horses racing just as the pickpocket finishes his task. We see no horses, but at no point is there any doubt that the scene is being played out on a racecourse. Such economy of visual is only possible when there is a pre-planned sound design within the script.

Another great example is from our own classic – Ramesh Sippy’s SHOLAY. The sound design used for the introduction of the greatest villain ever of Hindi cinema – GABBAR SINGH is iconic. When Thakur’s family gets massacred by Gabbar, we initially don’t see Gabbar at all. It’s just the leitmotif of his character that is introduced and the audience shivers! And there you see the dacoit on the hillock with his gun trailed at the lone survivor- Thakur’s little grandson. And just as he pulls the trigger, the sound of a train steam engine becomes the finishing flourish of this masterly crafted scene.

Similarly, the entire ambiance of the village in several scenes is created entirely on the soundtrack which adds multiple layers to the visual story being told.

It would be really interesting to know from Mr. Sippy and the writers Salim Sahab and Javed Sahab, as to what kind of coding was done into the script to make space and scope for this kind of highly complimenting sound design during shooting and post-production.

Another example, from a recent movie, is from the immensely popular BAND BAAJA BAARAAT written by Habib Faisal and directed by Maeesh Sharma. The pre-interval scene is a much-awaited kiss between the leads. Typically, a kiss between leads plays out to a romantic score. But in this scene, there is complete silence but for the ambiance sound of the room, which makes the intimacy feel very real. And I remember the impact it had on the audience in the hall, making them feel as if they were present right there in that very room. Such is the power of silence! Again, this could have been a call taken in post-production. But I strongly suspect this might have been written into the script.

There are innumerable examples from great movies where the sound design was coded into the script by the writer at a germ level and all the sound technicians contributed at the script level itself.

To imbibe this skill, a writer may want to consciously experience ambiances of different worlds he or she chooses to set the story, solely form an aural perspective. If a writer makes this a habit and part of his research, this hard work is bound to pay rich dividends.